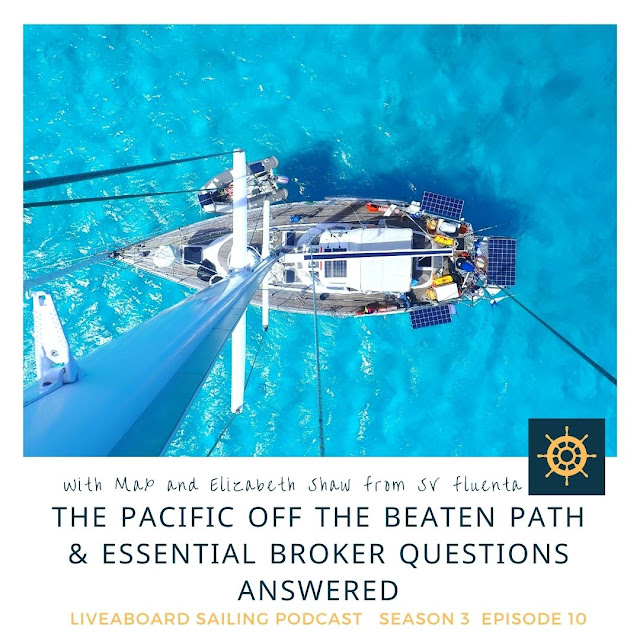 We have been honoured to do various interviews and presentations but this interview with Annika at the "Liveaboard Sailing Podcast" was particularly fun.  We talked about our transition from experienced sailors to full time cruisers with young children to our transition now to working in the marine industry while still living aboard Fluenta.

You can listen to the podcast here:  https://shows.acast.com/liveaboard-sailing-podcast/episodes/the-pacific-off-the-beaten-path-essential-broker-questions  Last I checked it had over 2000 downloads !

Posted by The crew of SV Fluenta at 05:40 No comments: 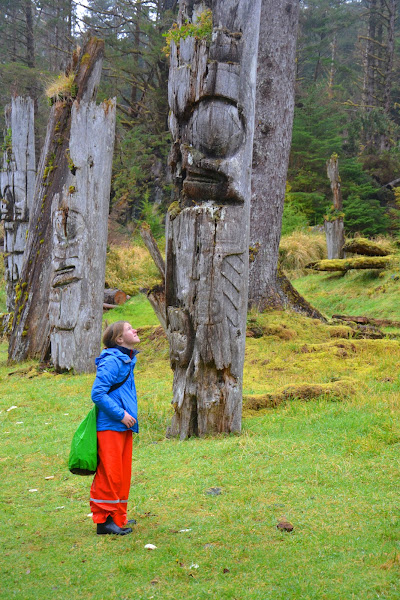 Somehow once Fluenta and her crew returned to Canada life became hectic again and the blog has been mostly neglected. However, I hope to fill in a few gaps from the last part of our trip back. One of the highlights was our time in Haida Gwaii. This is generally perceived as an adventurous cruising destination in the summer so not surprisingly he had the park in Gwaii Haanas to ourselves as even the staff were gone for the season by the time we were there in November. The park is a marine conservation area and Haida heritage site so there are mandatory briefings required before visiting the site. We anchored in front of the museum and headquarters for the park at Skidagate and were fortunate to get a personal briefing from one of the senior managers as opposed to the temporary staff in the "normal" season. With all of our usual questions the briefing took twice as long as usual. Johnathan was studying the first nations in school so the museum was perfect timing.

From Skidagate we proceeded south to Gwaii Haanas for several days. Our first stop was Hot Spring Island were not surprisingly the highlight was the hot springs and a rather chilly ocean swim. It was clear we were not in the South Pacific anymore !

The highlight was SG̱ang Gwaay (Anthony Island) which is one of the primary Haida heritage sites. Somehow the fog and mist seemed appropriate. 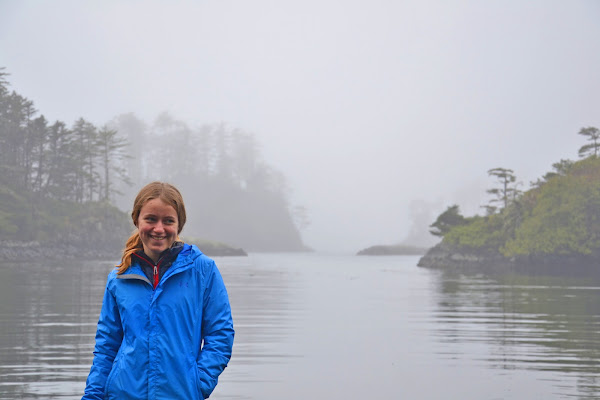 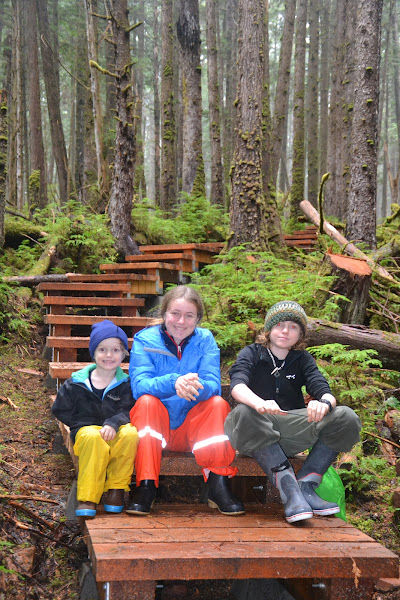 Posted by The crew of SV Fluenta at 08:32 No comments: 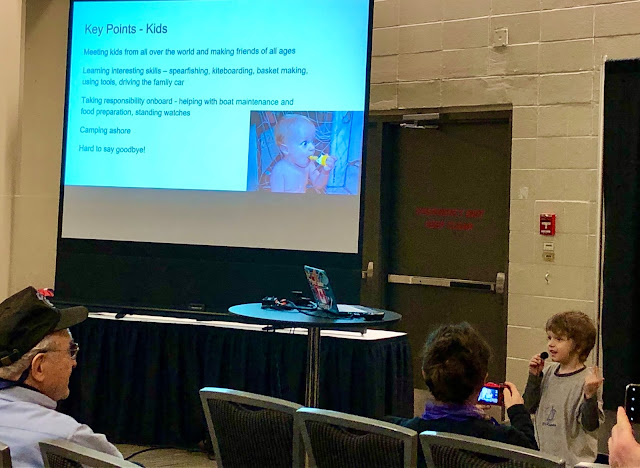 Benjamin talking at the 2020 Boat Show !

What a difference a year makes.  We were able to do a presentation as a family in person at the Vancouver International Boat Show last year.  This year we were invited to speak again but, as with everyone else, it was all "virtual".  Not as much fun but the good thing is that it was recorded so you can watch our presentation for a few more months even if you missed the show itself. 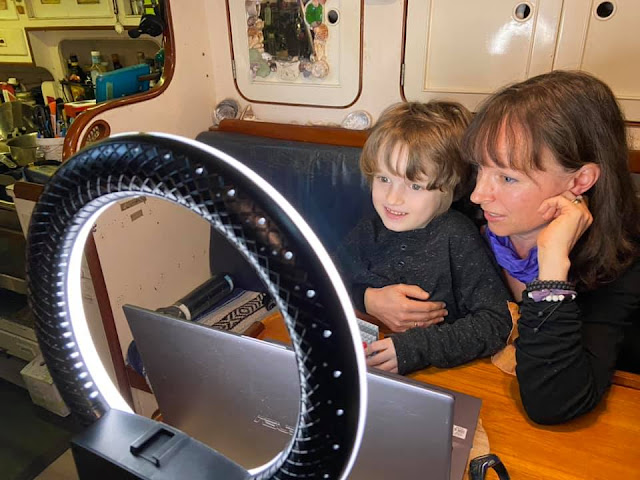 Benjamin talking at the 2021 Boat Show !

The Virtual Vancouver Boat Show platform will remain open for 6 months (until August 27, 2021)! The link is here:  https://virtual.vancouverboatshow.ca
If you are not yet registered for the show you can do so, for free, here:   https://www.vancouverboatshow.ca/register/
Once you are logged in to the boat show then click on "Seminars" 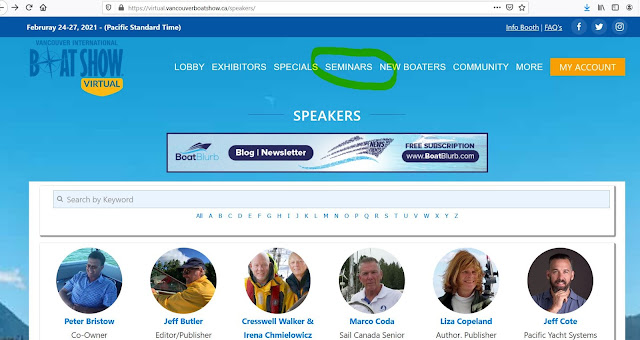 And then scroll down to find the crew of Fluenta 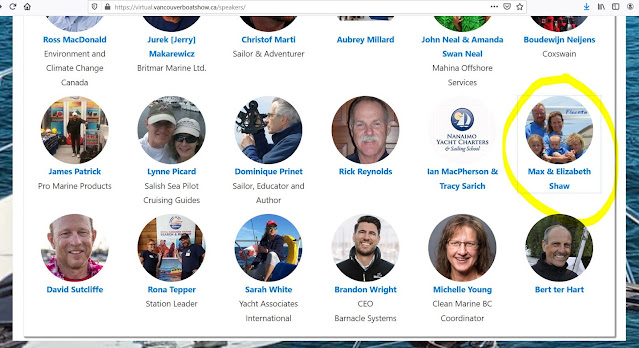 Sadly we are not actively cruising at the moment but still living aboard and active in the marine industry and local sailing and boating organisations.  One of our new roles is as the Seven Seas Cruising Association (SSCA) Cruising Hosts for the Sidney, BC area.  Hopefully we will get to meet lots of new cruisers when the boarder open up again !

Here is the notice in the SSCA January 2021 Bulletin complete with typos: 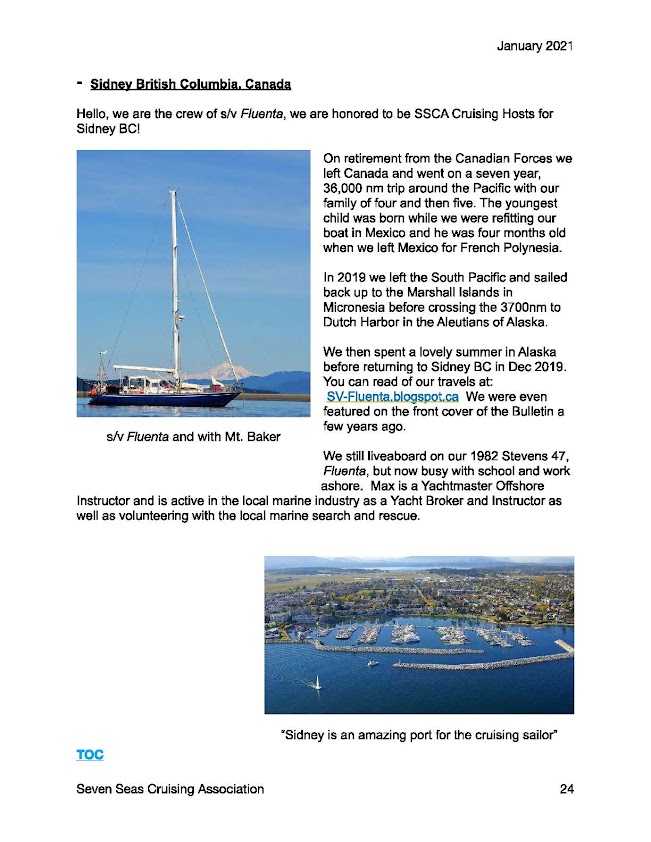 For fun, here is the link to Fluenta and crew on the front page of the bulletin a few years ago. 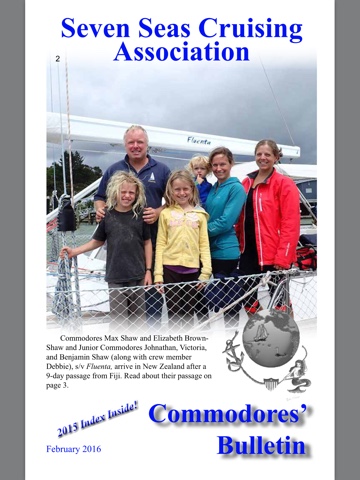 Rather an understatement but the blog has been a bit neglected as we have become busy with "land life".  We still liveboard but work and school take up a lot of our time now.  I at least work and volunteer in the marine industry so I still am connected to the sea but it is not the same as full time cruising.  We did have time to be interviewed by Andy Cross of 48 North awhile ago though.

I have fond memories of reading copies of 48 North magazine when we lived in BC 14 years ago.  Then, as we traveled it was great to read it on-line - especially the articles from our friends with Fluenta's sistership, Totem.  It is pretty cool therefore for us to have our very own Fluenta featured in the "My Boat"column of the December 2020 issue of 48 North.

Depending on what platform you are using to read the blog you might be able to read the article below or download the magazine here and find us on page 26. 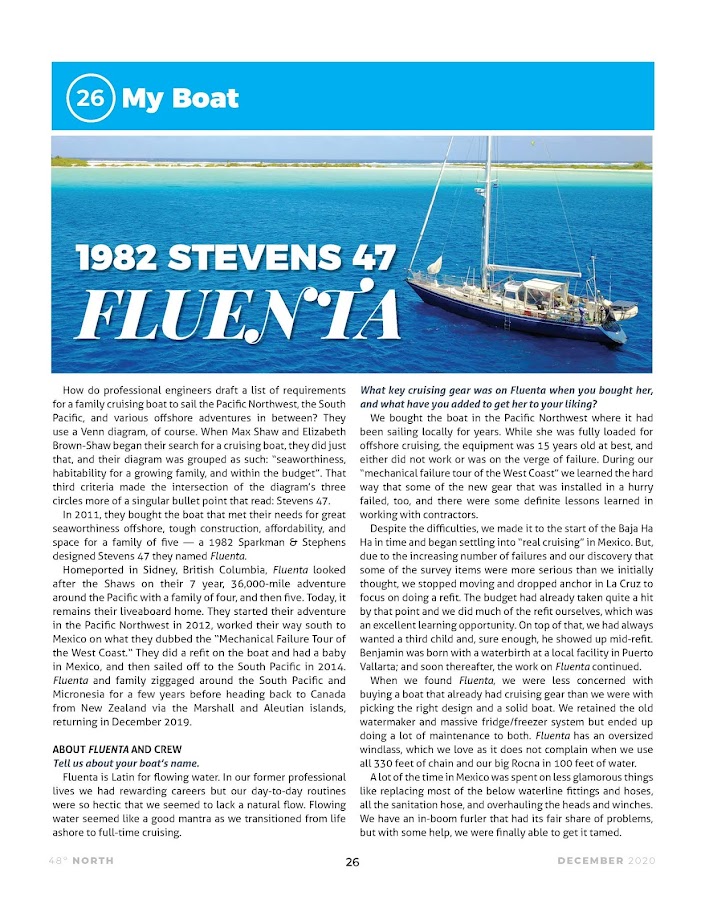 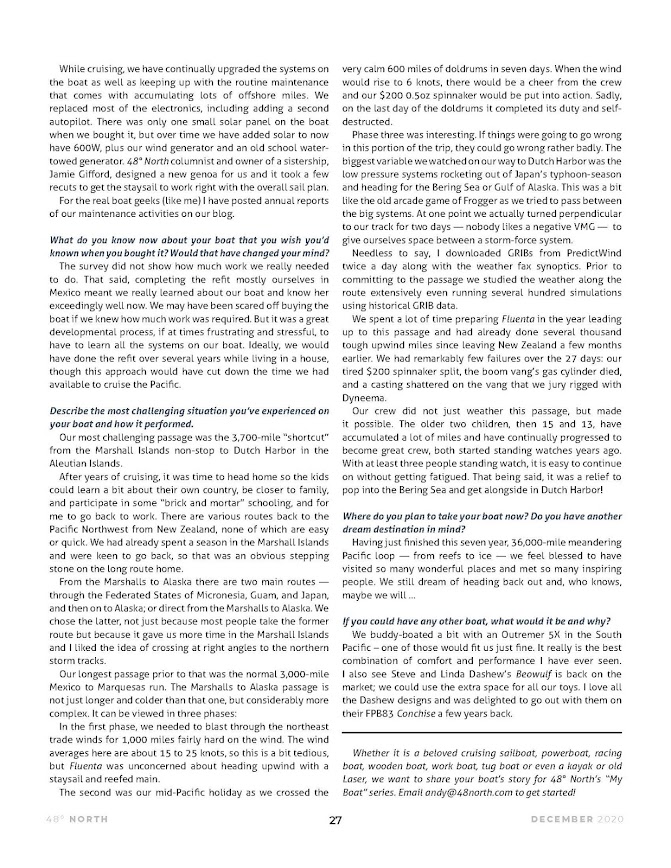 Posted by The crew of SV Fluenta at 21:18 No comments:

Shortly after our arrival back in Canada, we attended the annual gathering of the Ocean Cruising Club in Victoria where we met Marianne Scott.  Not only is Marianne an accomplished off-shore sailor, but she has written for dozens of magazines in Canada, the U.S., Australia and Great Britain, and has published numerous books on an amazing variety of topics.  She asked if she could interview us for her regular column, and we were honoured to agree.

She visited us at the marina as the COVID restrictions were beginning to ease - at an appropriate distance outdoors under the marina tent - for the interview, and she somehow managed to collate our five somewhat random inputs into the well-written story below.

The article appears in the July 2020 Pacific Yachting . 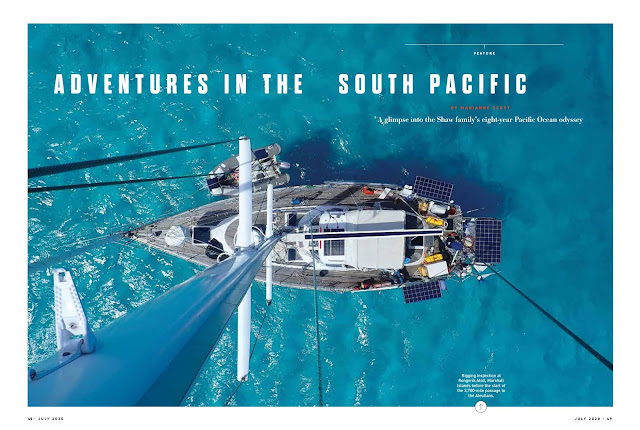 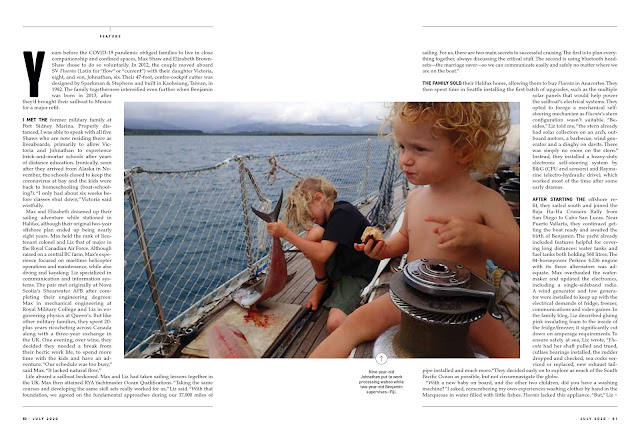 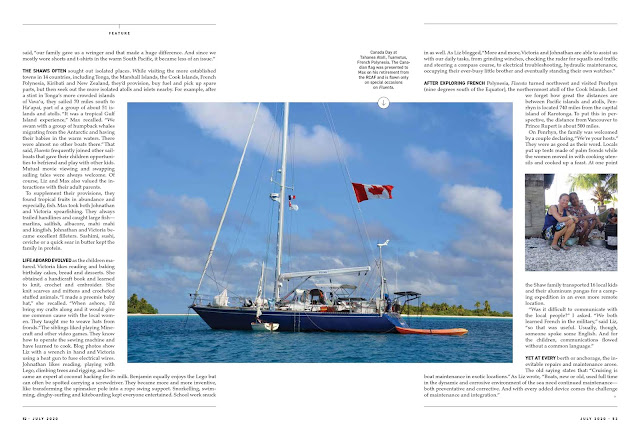 Posted by The crew of SV Fluenta at 16:46 No comments:

Fluenta in Prince Rupert - Back in Canada ! 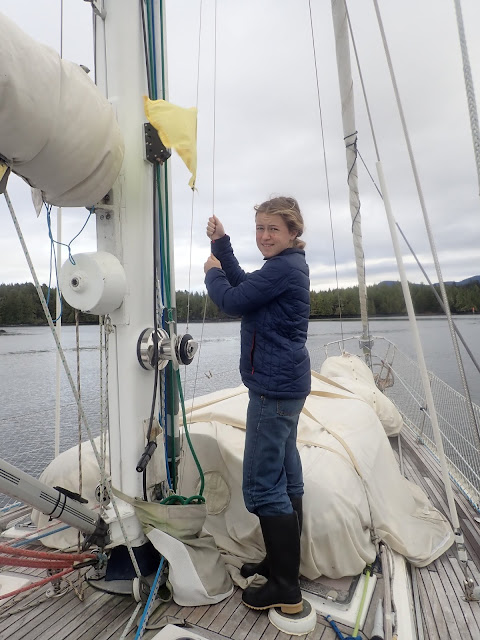 Eventually the weather looked good enough and we departed Ketchikan for Prince Rupert. Especially this late in the season, there is not enough daylight to do the trip in one day so we stopped at Port Tongass for the night.  Port Tongass ironically is not a port and not really even a good anchorage outside of settled weather but it was a place to stop for the night.  We zoomed across Chatham Sounds soon enough where we tied up at the Prince Rupert Rowing and Yacht Club (PRRYC) and were efficiently cleared through Canadian Customs.  It was a bit surreal that we were back in Canada.

The Manager of the  PRRYC, Kevin, has to win the prize for the most helpful Yacht Club manager ever.  He was great help as we made some repairs and planned our trip to Haida Gwaii.  Top of the repair list was to replace the leaking exhaust elbow and some of the exhaust hose as well as getting the heater going again now that we had the required parts.  I also managed to renew my well expired BC drivers license before the cut-off for renewals or I would have had to redo the driving tests.

We always advise people heading out cruising that one of the costs of cruising is the requirement to be constantly vigilant.  Being tied up to a marina we had relaxed a bit but were then surprised to see that storm force winds were forecast for our area.  Our position on the dock was not ideal so we moved the boat as the winds were building into the 20 kt range.  The barometer dropped about 14mb in 13 hours before it shot up in even less time.  At one point the barometric pressure was rising at 5mb/hr. The pilot boat reported gusts into the 70 kt range.  We were pretty exposed and were taking significant waves on the beam that were trying hard to put Fluenta onto the dock. It was fun night - yes these things always happen at night - trying to keep the fenders in position.  Our crazy Argentinian neighbour was even more exposed and I spent some time trying to help him but after a few hours we realised it was rather futile to keep fenders between his hull and the dock.  Thankfully his aluminum boat managed without our help (as a side note the Argentinian, Pablo, lost his previous boat in the North West Passage the year before - http://arcticnorthwestpassage.blogspot.com/2018/10/sv-crystal-recalls-loss-of-sv-anahita.html). 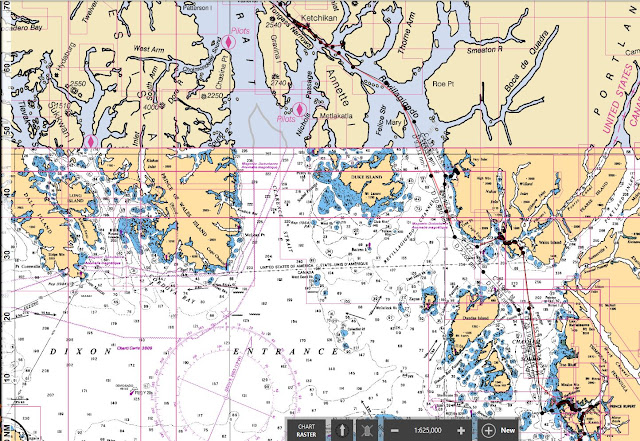