Into the Ice - Nellie Juan Glacier in Prince William Sound 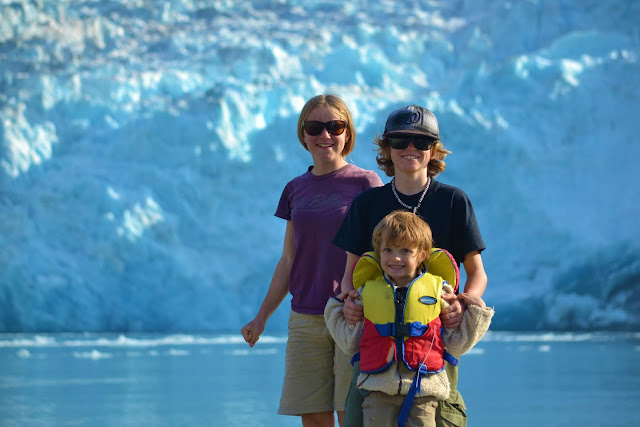 As we planned our summer in Alaska, we were motivated by our desire to spend as long as possible in Prince William Sound; in fact, this place became almost mythical as we looked ahead to our trip.  It would mark the Northern apogee of our seven-year journey (north of 60N), and would be one of the most remote areas we would visit in Alaska.  Everything we had read about this unique area of glacial ice, wild mountain scenery, and quiet anchorages, populated only by wildlife (and very rare tour boats) beckoned to us to come and stay for at least a couple of weeks.  Of course, everything else we read reminded us to clear out by the end of August before the weather changed, so even as we were getting ready to leave Majuro in May, we were mindful of the days ticking by on the calendar.  After the usual weather and chart considerations, each travel decision was informed by this sense of urgency.


Happily, our plan came together beautifully, and we set out from Homer, headed for our first glacier, on the second Saturday in August.  Our weather and our boat had cooperated, and we had met our goal of leaving ourselves 2-3 weeks to enjoy the area before we had to cross the Gulf of Alaska.

After an idyllic overnight passage, we drew quietly into “Nellie’s Rest”, a little key-hole shaped nook a couple of miles from the Nellie Juan Glacier, shortly after dawn.  As usual, I was on the foredeck and Max was at the helm, and we spoke to one another using our Bluetooth headsets.  What was unusual was the way the extraordinary stillness of the place invoked such a sense of reverence that I almost felt compelled to whisper. The trees came all the way to the shoreline and reflected on the glassy surface of the water.  Hardly a breath of air moved. When we stopped the engine, the only sound was the welcoming call from the loons.


Having sailed all night to arrive in the morning, the obvious next step was to go to sleep for several hours :)  Sometimes it is nice for the kids when the parents sleep in - our nap gave Victoria, Johnathan, and Benjamin time to 'triple' in Minecraft without any harassment to do chores.  When we surfaced, we had a quick meal and then launched the dinghy for an exploratory expedition.  The long hours of daylight meant that there was plenty of time, even leaving mid-afternoon.

Almost immediately, we learned our first glacier-watching lesson - glaciers make the cold headwind from the dinghy even colder and windier!  As we got closer to the glacier, the wind and chop picked up, and made those of us who were wearing foullie bottoms (me) glad that we had done so, but those of us with no gloves (also me) wish for them!  Future expeditions saw us much more warmly dressed!  (The worriers among you may be reassured to know that despite our not-quite-adequate layers, we were carrying a tool kit, emergency beacon, flares, radio, and other similar supplies, as we always do, in case we ran into trouble.)

In the end, the effort was worth it.  The Nellie Juan glacier reaches down into both sides of tiny bay.  Active calving was occurring to our left, and the glacier had receded from the shore on our right, so we positioned ourselves in the middle and watched and listened from the dinghy as gigantic pieces of ice cracked and fell from the glacier, before landing the dinghy and scrambling up the rocks to get a view down on the water.


When we visited the volcano on Tanna in Vanuatu two years ago, the feeling and sound of the lava boiling and exploding was primal.  We could feel the vibrations of the explosions in our rib cages.  I would describe the sound of the glacier cracking and calving the same way. Especially with reverberations echoing off the steep rock walls, each time even a small piece of ice or rock broke off and tumbled into the water, the sound was immense, and there were times when we could feel the sound in our chests as much as we could hear it with our ears.


From our perch on the side of the hill, we learned about the kind of waves that could be generated when large pieces of ice broke off; unfortunately, we had to watch as the waves made their way across the bay to our dinghy, which we had pulled up the beach. It was one time that we were glad it had dried out with the falling tide!!  The first wave rocked it a little; the second would have hit it harder, but by then the tide had dropped and the dinghy was safe.  Whew!


Benjamin and I put our new Alaskan boots to the test on our little climb.  Xtratufs are intended for fishing, but we found that they worked for scrambling as well :)  After years of seaboots that just barely fit, didn't have room for extra socks, and invariably gave me cold feet if I had to be still for any length of time, it was nice to have roomy, cozy boots, lined with wicking 'Bamas' as per the advice of our friends in Dutch Harbor.  Benjamin wasn't very happy scrambling up over all the big rocks (truth be told, neither was I), but he made it up to the ridge that we picked as our photo location, and once Johnathan took his hand, they were faster than all of us on the way down :)


Back in the dinghy, we were surprised to see another boat approaching what we considered to be *our* private glacier, but when it turned out that they were another family travelling together (and that they would very kindly take our photo with the glacier behind us) we decided that they were welcome :)


On our way back to Fluenta, we saw a scene that we hoped would be repeated so we could get a photo of it, but it turned to be a one-off for the entire season.  As with so many fleeting experiences, we will have to retain this moment in our mind's eye, and try to use words to describe it: we briefly saw a mother sea otter with her tiny blonde baby on her chest.  By the time we could reach for our camera, they were gone.  Short-lived as it was, we all felt moved at this image of nature regenerating itself.

We returned to the glacier the following morning, wearing lots of extra layers.  We took a picnic, and watched the glacier from the comfort of the dinghy.  We all enjoyed trying to guess which piece of ice would fall next.  When the glacier took a moment of pause, we would turn our attention the antics of the seals that gathered near its face.  They seemed to have an instinct that told them when we were looking at them, especially if we were looking through the lens of a camera.  They would all lounge on a piece of floating ice, and then if they noticed us they would slide, as one, into the water.  Victoria figured out that we could position the dinghy behind another large piece of ice and watch them without the seals noticing us.


It was about 3nm from Fluenta to the face of the glacier, a short amount of which could be covered at planing speed, but much of which needed to be traversed carefully, watching for pieces of floating ice.  Most were easy to see, especially in the sunlight, as they were the stereotypical shades of aquamarine and white, but some were camouflaged: they were clear pieces of ice that barely showed up against the silty grey water.  We kept a constant safety lookout at the bow.  Most of the time, the ice was far more a source of entertainment than danger: it was fun to try to identify, and give names to, the ice sculptures we were passing by.  We saw lots of sea creatures, birds, swans, ships, and even the odd airplane ready for takeoff :)

Meeting interesting people is a fascinating part of travelling.  On our way over to the Glacier, we thought we saw a little tent on the beach not far from Fluenta.  On our way back, we met up with its two occupants: they had come on a two-week kayak-camping holiday from the southern US.  One of them had guided in the area years ago, and she was back to visit.  We sometimes get credited with living a rugged life, but I have to say that sitting in a kayak and sleeping on a beach would offer an even closer experience of the great outdoors!  With only human power, they were paddling towards the glacier, but the 15-20 kts headwinds turned them back.  I was grateful for our dinghy engine that let us experience Nellie Juan up close!

Until next time,
Elizabeth

Comments ? (Note all comments are moderated)