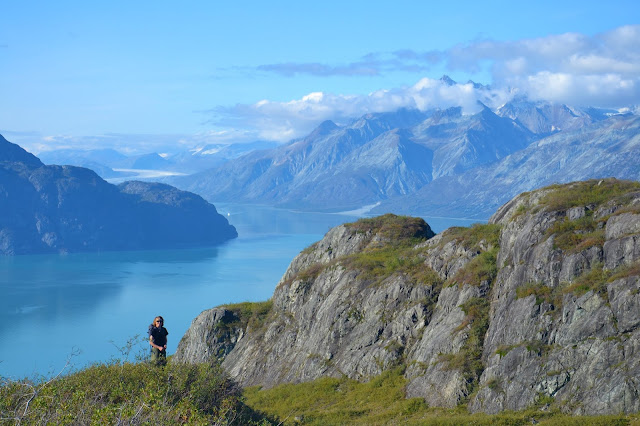 Most nights we anchored in front of Reid Glacier.  Usually we would head out to day trip in Fluenta to see the tidewater glaciers but we also did hikes from Fluenta in the inlet.  One trip involved the teenagers and I heading up one of the creek beds to get above the tree line and the other was a family trip along the edge of Reid Glacier. 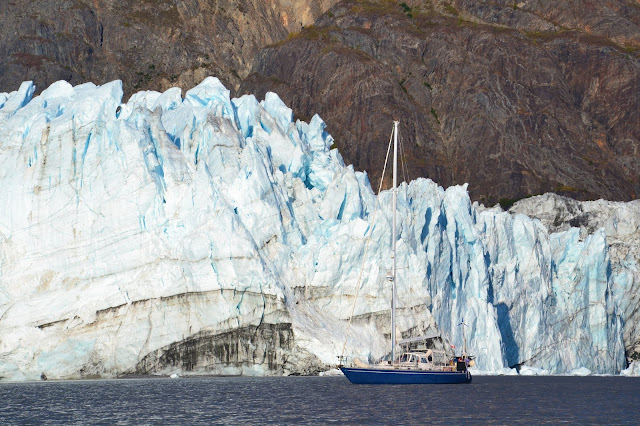 We left Lituya Bay after our day there to enjoy a nice calm overnight passage with a bit of light air sailing from all angles and then motoring in dead calm with the northern lights on display.  At one point we were gybing angles to keep the boat moving and were pointing towards French Polynesia but decided it was too early to head back yet (only 4600 nm away). We stopped at Bartlett Cove to clear into Glacier Bay (it is a National Park) but because it was mid September we no longer required a permit.  We used the ranger station's internet to catch up on some admin/logistic dramas, and motored in the glassy calm to Sandy Cove while the humpbacks and sea lions performed.


It was very beautiful but a bit of a shock after the more remote parts of Alaska further north. We had been in Glacier Bay for only an afternoon and had seen two 980' cruise ships, multiple tour boats and two megayachts (who ran their generators all night).


The next day we left Sandy Cove at 0600 to motor up to see Margerie and Grand Pacific Glacier. The wind was gusty from the north so we did not feel secure anchoring in Tarr Inlet therefore we left one adult loitering in Fluenta while kids and the other adult checked out the glacier. Margerie Glacier put on quite a show with massive chunks of ice collapsing into the water from 200' with thunderous splashes. There was quite a bit of ice in the water for the last two miles to the glacier. We arrived after the two massive cruise ships so we had it to ourselves for most of the time and then only later with one megayacht.  At one point we were 1.0 nm from the Canadian border.


The next day Fluenta was in a lot of photos.  We anchored for the day for a front row spot at Margerie Glacier as the ice was open enough to get to where the depth went from 400 to 30 feet. Two cruise ships (1080 to 950 feet long) and two tour boats (170 to 200 feet long) came along to sightsee as well so Fluenta will be part of their photos too. Luckily with the height and width of the glacier we were not blocking much of their view.

Into Lituya - Site of the Megatsunami and La Perouse's Lost Crew 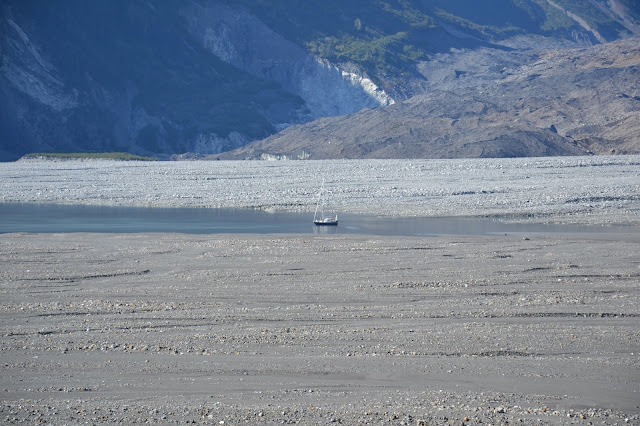 As a child I read, in National Geographic I suspect, about the 1958 megatsunami in Lituya Bay and sure enough when I did the initial planning for our Alaska adventure there it was pretty much on our rhumb line. The megatsunami was one of the biggest waves ever recorded ...  a 1,720 ft wave ... Obviously we needed to stop there ...

We anchored in Lituya Bay after short overnight passage from Yakutat. We had great mountain views on the passage including Mt St Elias (18,008 ft) and Mt Fairweather (15,300 ft) lit by sunlight and then the northern lights. At first we anchored just inside the bay near where La Perouse (a French explorer following a few years after Capt Cook's last voyage) lost over 10% of his crew when their long boat was swept out of the pass on the ebb tide in 1786.  Despite this history, it was an amazingly beautiful spot and even after a brief nap to recover from the overnight passage it was tempting to linger.  However, we moved up the fjord to see the effects of the 1958 tsunami.

As we approached northeast end of the fjord where the Gilbert and Crillion Inlets were supposed to be, we had a surprise.  Both inlets had disappeared, and there were mud flats about 7 ft above chart datum 1.3 nm out from where the beach was supposed to be.  Crillion Glacier was about 0.9 nm further towards the sea than the charts show (we have Navionics and NOAA charts).   This was especially impressive as Crillon Inlet was shown to be 380 feet deep on the chart.

We anchored Fluenta in 100' (should be about 400' according to the chart) very close to the shore (not an overnight anchorage !) and the kids and I did a minor expedition ashore to walk to the glacier face.  We saw lots of bear and potentially wolf prints so kept the shore excursion short.


Yet another location where we would be happy to spend lots more time but alas the season was moving along and we had a weather window to continue south to join the masses in SE Alaska.

And for folks looking to follow in our path, a copy of our tracks are below:

Posted by The crew of SV Fluenta at 11:38 No comments: