Messing around in boats

We have been able to borrow a little sailing dingy that people have been joking is the most sailed boat in La Cruz: 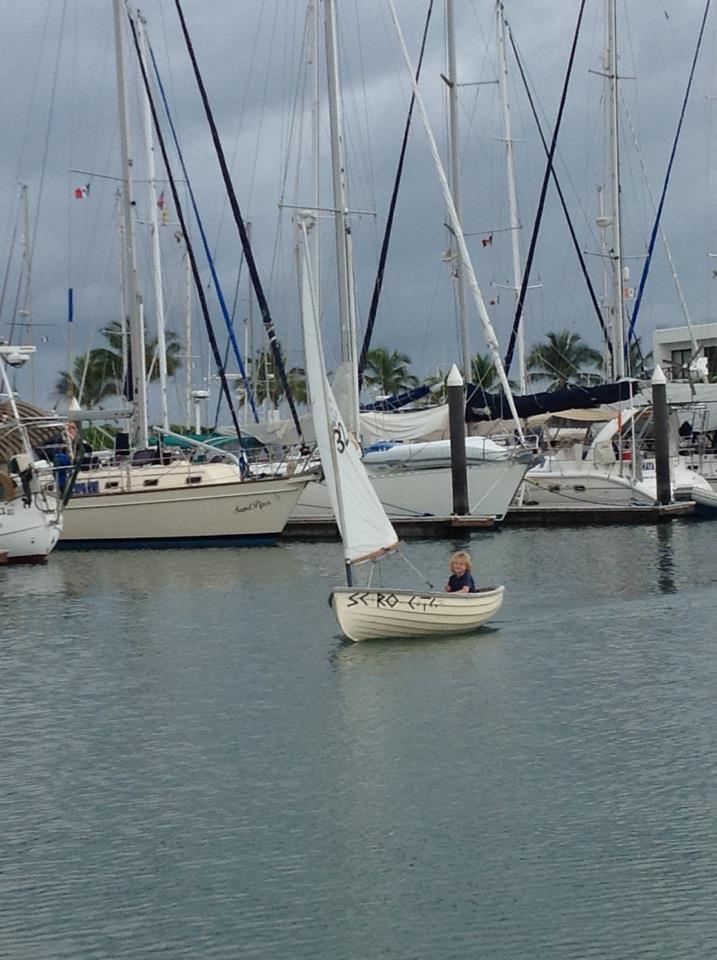 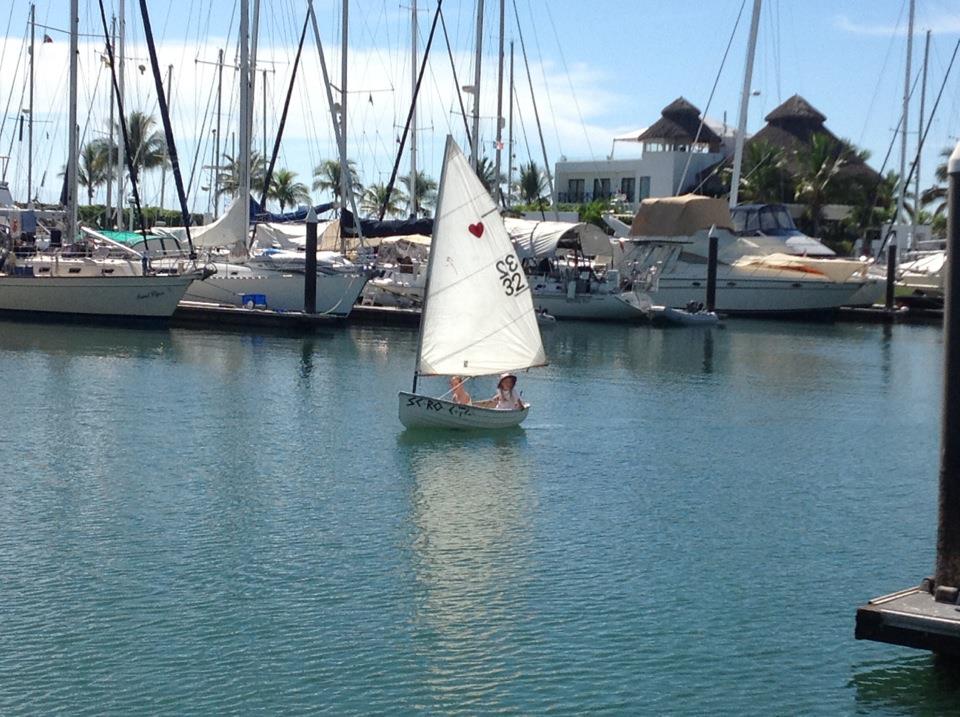 Settling in at La Cruz

It's Sunday afternoon (again) and this seems like a good moment to pause and reconnect.

We arrived at La Cruz in time for Christmas, and in a few short weeks have discovered why so many cruisers come here ... and stay here. We spent a week at anchor (six days without running our engine, yeah!), and the last two weeks in the Marina.  We have decided to stay put for a few weeks, and do some of the jobs whose supplies have been our interior decorating motif since we left San Diego.  This decision was hastened by a rotted bulkhead in the kids' cabin that we have arranged to have replaced/strengthened with fibreglass last week.  We have also been offered the use of another boat so that we have a calm place to sleep while our boat is in disarrary.  All of this means that we will likely be in La Cruz til almost the middle of February.  Now back to our story ...

Our kids gave us a taste of the fishing excitement that was to come as early as our arrival in the anchorage.  For some reason sardines and flying fish took up housekeeping under our boat ... they may have thought it was a safe place to hide from the sun and the pelicans, but they hadn't banked on kids with nets, who discovered that they could catch them by the dozen.  Except for the ones that died in our bucket, this was a catch & release operation.  Victoria & Johnathan would hang off the toe rails by ten toes and five fingers, and use the other hand to hold their nets to capture the fish.  This proved an enjoyable pastime from the moment they opened their eyes in the morning until they closed them again at night.

Our anchorage was a virtual aquarium ... during that first week, we had a ray jump out of the water, a dorado leap in the air to chase another fish, a group of dolphins swim by, and even a whale swim through one night (we could hear it blowing every few minutes as it moved past the boat).  We keep pinching ourselves ... we're not in Halifax, Toto!

As I said, six days after we arrived at the La Cruz anchorage from Paradise Village Marina, it was time to make noise and run our engine.  Since we could either do this at anchor (noisy, and not especially good for the engine) or underway (noisy, and better for the engine), we decided that we would go for a bit of a jaunt up the coast.  We headed out of La Cruz towards Punta Mita, and had hardly been underway for five minutes when we saw an unmistakable sign of whales ... a collection of boats just bobbing in the water a couple of miles away!  Sure enough, we soon saw the telltale splashes and spouts, and headed in that direction. We were not disappointed.  An hour later, we had seen several whales splashing and broaching within a few boatlengths of us.  The kids (big ones and little ones!) were super excited.

The following day, we headed into La Cruz for the Sunday Market (at which we learned the hard way that all the good stuff is snapped up within the first couple of hours ... we've arrived right at the start the last two weeks, and had much better luck).  In one of those funny times where one moment opens up a whole new world, during our walk back towards the dingy dock, while we were talking about heading to the little marina pool before heading back to the boat, a couple coming the other way heard the word "pool", figured we had kids, and stopped to talk to us.  It turned out that their boys were the same ages as our kids, and we arranged to meet up a little later.  This little pool visit led to an invitation to join them on an under-the-stars camping trip they were planning for New Year's Eve, and we decided to come to the marina overnight so that the pelicans in the anchorage would be less likely to move onto our boat during our absence.

The following morning, with a forecast of 24 hours of rain, we collectively elected for an afternoon of soccer on a beach we could walk to, followed by a pot-luck party right on our dock, rather than the original plan of sleeping under a less-than-waterproof mosquito net. Our friend Eric on Rebel Heart expressed our sentiments beautifully in his New Year's Eve post ...(http://rebelheart.squarespace.com/blog/2013/1/1/new-yearrsquos-eve.html)... so I will send you there instead of repeating the story here (fun for our little kids to be the "big kids" in his post!).  Over the course of an evening when the grownups could relax and chat, the six kids (two of ours, two from Heavy Metal, our friends from the Baja Ha Ha, and two from Kenta Anae) netted a bag full of little "trigger/tortilla/moon" fish, as well as a mullet that they caught and released.  No one went to bed before 1am, and we all had a good time.  This was also a sign of things to come, as these kids have hardly been to bed at a "normal time" ever since.  Not only are they loving fishing from the dock, they seem to have been adopted by some of the professionals, who are glad to share their knowledge with the next generation of fishing aficionados.

It wasn't just in the anchorage that we had our brushes with nature... just after lunch the day after the rain ended, we heard a strange humming sound coming from the air above our boat.  We looked up just in time to see thousands of (honey) bees heading for our boat.  Max was on the dock, and I was inside, so I shut the hatches and he went for help.  Turns out that this is not a totally unusual experience in Mexico, and the security guard was quick to come with a bucket of soapy water.  He and Max spent the next 20 minutes sloshing buckets of water mixed with laundry detergent-over the back of our boat, and then we rinsed them away with a high pressure hose.  They turned out to be some kind of honey bees, and we found out later that they crave fresh water.  So soon after a big rainfall, there was probably a lot of it left under our solar panel, and so that is where their queen landed and her groupies followed.  Thankfully, no one was stung, and within an hour all but the last stragglers (who stuck around for another few days) were gone.  It also prompted us to clean our deck, which we had been planning to do anyway ...

We thought we would only be alongside for a couple of nights over the New Year, but when we had a rigger (our fourth since Anacortes) look at a bulge on our deck and our (yet again) out of tune rig, we discovered the usual chain of events ... a hatch that let in water (as an aside, did I mention 24 hours of rain ... I felt like Noah emerging from the Ark on January 2nd!  Picture Victoria or Halifax on a soft spring day, and that was New Year's Day in La Cruz) ... a wall (that was meant to be giving lateral stability to our hull) that soaked through in the rain, resulting in wood that had become spongy .  Our rigger summed it up pretty succinctly when he told Max to plan for "lots of time and lots of money" to fix it.  Thankfully, the fix has not required as extensive of a demolition as we had first thought, but we are certainly grateful to some friends for the loan of their boat while they are home in California for a month!  There are certainly worse places in the world to be "stuck" (as our friends on Totem pointed out, we have kids (big and little) to play with, great (and cheap) food, great music, trades people to assist us, sources of supply, etc, etc) and I am grateful for the chance to move ahead with some of our bigger projects while we are alongside.

Max and the kids participated in a paddling rally ... you didn't have to be fast but you had to collect balloons! 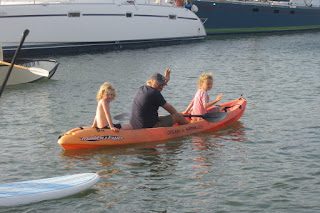 Then Max had a chance to try a stand-up paddle board.   This is on our Christmas list, once we make room for it on our boat and in our schedule! 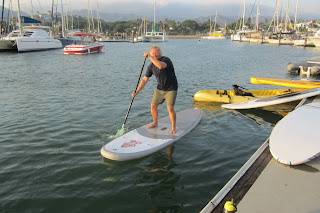 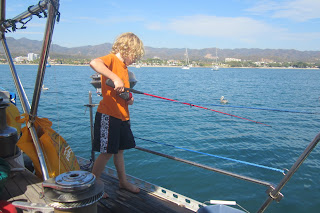 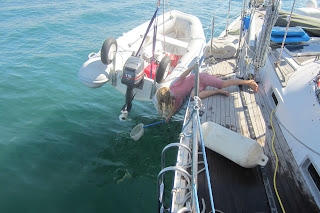 Zoom in to see the look on Johnathan's face as he spots the whales for the first time ... 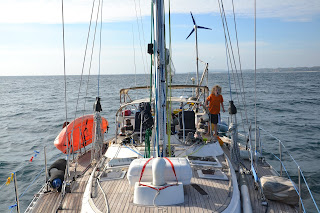 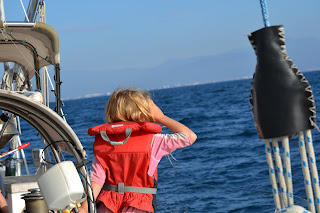 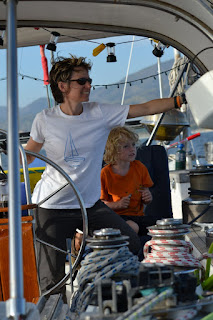 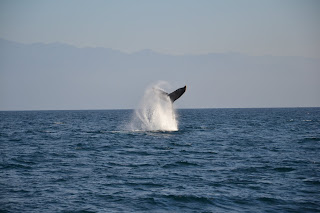 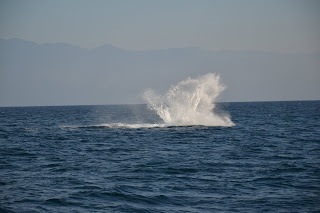 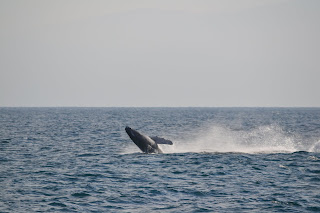 We weren't the only ones out watching the whales ... dozens of paying customers were looking on from the big ketch near us. 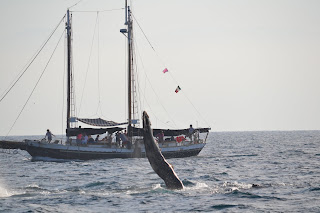 New Year's Dinner ... noteworthy because we were actually able to sit on our bench and eat at our table (no Lego, no tools) and because of the yummy turkey breast we had brought with us from San Diego. 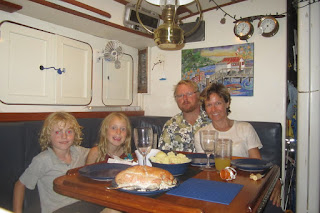 Victoria with two of the Trigger fish she caught on New Year's Eve. 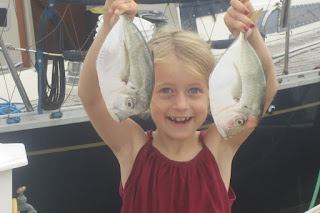 Kids from Dock 11 with their catch (whole) 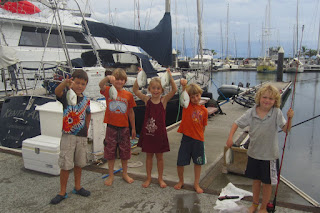 Kids from Dock 11 with their catch (filleted by themselves and cooked in butter by Mom).  We let them use knives but not propane! 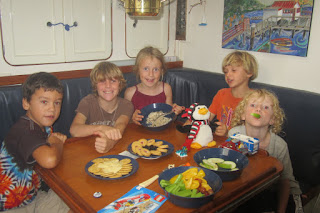 Bees ... thousands of bees on our solar panel. 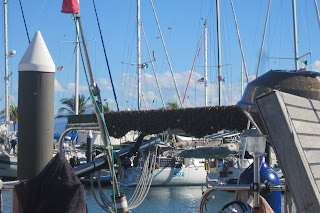 Another view of the  bees (yes, really, they are hanging down from the edge by about 6-8").  We think the Queen Bee was under the rim of the solar panel, which is why it took a while to get rid of them. 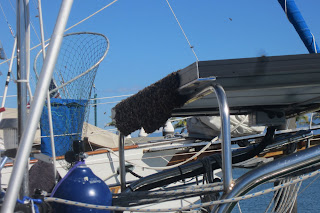 Victoria with her first Barracuda (caught at midnight). 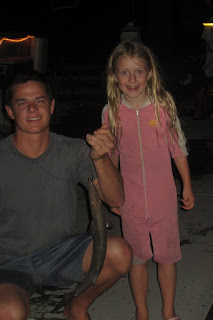 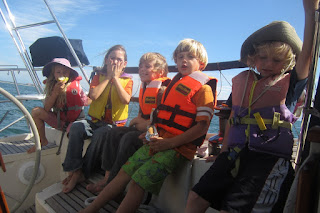 And no longer sitting still!  Hanging from the framework at the stern of Kenta Anae.  Look Ma, no hands :) 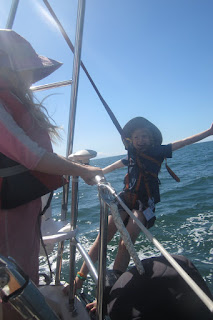 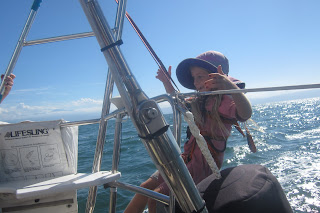 We have loved the welcome we have received here in La Cruz.  Our neighbours on the dock are quick to assist with rides to the grocery store, advice on where to find what we need, or who to ask for assistance, invitations to hear musicians play, and company for daily yoga practice.  I feel blessed, and my heart is full.  This is cruising (definition: fixing our boat in an exotic locale) and life is good.